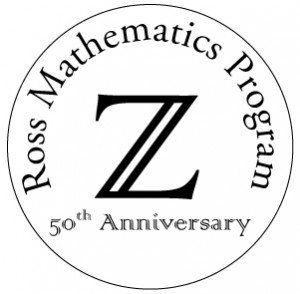 In 1957 at the University of Notre Dame, Professor Arnold Ross launched his innovative summer mathematics program dedicated to involving young people with mathematical explorations. In 1963 Dr. Ross and his "SSTP" (Summer Science Training Program) moved to Ohio State, where the Program is still going strong. Dr. Ross led the number theory course every summer until he stepped down in 2000 at the age of 94. He passed away in 2002.

In July 2007 we celebrated the Fiftieth Anniversary of the founding of the Ross Mathematics Program at the Ohio State University in Columbus, Ohio.

You can find photos of the reunion and conference here.

Several lecturers presented topics of broad interest to Ross Program alumni and students.
Here is an outline of the schedule. Click here for a more detailed SCHEDULE of lectures and other events.

We had a display of various sorts of Ross Program memorabilia and sold Ross Reunion
QR T-shirts, and Z hats. You can still order shirts and hats while supplies last!
Send a request to the address given below.

Alumni and friends of the Ross Program are encouraged to keep in touch with the Program and let us know what sorts of things you have been doing recently. Email address:   ross@math.osu.edu   Let us know your impressions of the Program and its influence on you, as well as an update on things you've done since then. Responses will be posted on the News and Comments page (if you give permission). Responses from all types of alumni will help document the Program's influence, a useful step in our continual search for scholarship funding.   (And it's fun to read them.)

Funding, and your contributions

In recent years the Ross Program has enjoyed a fairly stable funding base, ensuring its continued existence. That base of support is essential to the Ross Program, as becomes clearer when we recall the olden days of the 1980s and 1990s when Dr. Ross had stressful searches every year to locate even minimal funding for his program.

This Fiftieth Anniversary is an appropriate moment to ask alumni and friends to help out with contributions to ensure that the Program not only exists, but continues to be excellent. CLICK HERE for further information about how you can help by contributing to the Arnold Ross Fund.

Here is the schedule of talks and other activities (print version):

Game of Ultimate Frisbee.Dinner (everyone independently), and then parties starting at 7:00 pm.

Banquet for Friends of the Ross Program, OSU Faculty Club starting at 6:00 pm.

For which positive integers D is there a right triangle with three rational sides and area D? This is a very old question, to which we still don't have a complete answer. But over the last thirty years modern number theory has made a lot of progress on it, via the theory of elliptic curves. In this talk we will survey what is known about this problem, and discuss its connections with other important open questions in number theory.

We first sketch the life and work of Leonhard Euler (1707 - 1783), whose 300th birthday is being celebrated this year. We then address a specific problem from number theory: the construction of amicable pairs (recall that two positive integers are amicable if each is the sum of the proper divisors of the other). The Greeks knew the amicable pair 220 and 284, and two others were found prior to the 18th century, when Euler arrived on the scene. In an awesome display of mathematical power, he found 58 new ones!

We shall examine how he did it - i.e., how he single-handedly increased the world's supply of amicable numbers twenty-fold. His argument is clever yet so easy to follow that we will generate a "new" amicable pair right before your eyes. And the topic seems fitting because, in the lives of both Leonhard Euler and Arnold Ross, number theory occupied a special place.

Labyrinths and mazes cradle millennia of legend and lore in their twisted articulations and are often considered mankind's first creation borne purely of human imagination. This talk addresses the synthesis of labyrinthine and maze structures, represented as curves on 2D manifolds. The curves evolve subject to forces that capture properties of randomness, smoothness and van der Waals attraction. Artists interactively control the output patterns by spatially varying the simulation parameters and using text, sound or imagery to control the evolving curves. The resulting curves have wide range of applications from model construction and animation to data visualization.

This picture is a labyrinth interactively grown over a picture of Jim Morrison (lead singer of The Doors).

Getting a Boost from Arnold Ross in 1949

I'll talk a bit about my career with an emphasis on Ross's influence, perhaps describing some of my recent work on black holes. An abstract might be available later.

On the Climate of Planets (known and unknown)

Though one doesn't often have occasion to make use of number theory in the study of planetary climate, there are three things I learned from Dr. Ross which have served me in good stead throughout my attempts to understand the basic physics determining what kind of climate a planet has. The first is "Prove or disprove, and salvage if possible." In science, there''s a big emphasis on the "salvage" part, since most theories are wrong in one way or another, and the key to progress is figuring out how to fix the failures while retaining the good bits. The second is "Generalize." Theories get more interesting when they bring out the common features in a broad range of circumstances. The third, and most important, is of course, "Think Deeply of Simple Things."

The physics of planetary climate is perhaps one of the clearest examples in science of the value of TDOST. The behavior of planets is complex, in the sense of exhibiting a broad variety of intricate and unexpected behavior. It is not complicated, though, in the sense of having a large number of parts each behaving according to different principles. Planetary atmospheres are more like the game of Go, with complex behavior emerging from pieces interacting via simple rules, than it is like a pinball machine.

In this lecture, I will provide a number of examples of how a range of different planetary climates emerge from simple physical principles. I will give some examples from the Solar System, focusing on Earth, Mars, Venus and Titan, and how these planets could have had radically different climates in the past. In these cases, I'll show how the interaction of three simple physical laws account for much of the range of behavior of these planets in the present and past: the Clausius-Clapeyron law determining the amount of a vapor (e.g. water or methane) an atmosphere can hold in saturation, the Stefan-Boltzmann law for emission of infrared radiation, and the albedo law determining reflection of solar energy by a partially ice-covered planet. From these we get phenomena as diverse as Snowball Earth, the runaway greenhouse, Methane rain on Titan, the Dry-Iced greenhouse effect warming Early Mars, ice ages, and global warming. In particular, we'll see why Titan, with a temperature of about 173 Celsius below zero, is dynamically like a hotter all-tropical Earth.

I will also give some flavor of the wealth of exotic extrasolar planets that have been discovered, and describe the factors that determine whether such planets could be habitable to life as we know it. Exotic possibilities include long-lived biospheres around red M-dwarf stars, and tide-locked large Earths with a too-hot sunside and a glaciated farside, with a habitable zone near the terminator. Thinking of this sort gives us an idea of how things might play out differently in other solar systems.

Stochastic models used in speech recognition, cryptanalysis and hedge fund management include a simple class called Hidden Markov Models. I'll talk about the senior paper of a Haverford math major on HMMs, a topic she learned about in my cryptography class. You will see how to use HMMs to model the string of letters in English text and the sequence of percentage changes in the Standard & Poor's 500 Index. Though their use in cryptanalysis is classified, researchers like Jim Simons and Nick Patterson who mastered their use in cryptography and language modeling have profitably employed them in finance and genomics.

See the 12 December 2006 New York Times article "A Cryptologist Takes a Crack at Deciphering DNA's Deep Secrets". Here is a link to that article .

In this talk I'll describe what has come to be known as "combinatorial game theory": that is, the theory of games with no chance and no hidden information. It turns out that the collection of such games possesses a surprisingly rich algebraic structure, reminiscent of (and containing) the structure of the real numbers, but with some subtle and surprising new features.

As we celebrate the fiftieth anniversary of Arnold Ross's program, we hope also to use our time together to reflect on some of the ideas Arnold contributed to the American mathematical scene and, in particular, to consider the ongoing influence of those ideas on mathematics and science education.

It is perhaps not entirely well known that Arnold Ross's famous program began not as a program for secondary school students, but rather as a program for secondary teachers. Indeed, Arnold's commitment to teacher education continued to be strong throughout the Ross Program years. Many of us still remember the clusters of teachers who sat quietly in the back of the room diligently taking notes of Arnold's lectures during our time in the program.

The panel presentation will describe three teacher education programs that were designed by alumni of Arnold's program. All three programs are deeply influenced by the principles of the Ross program, but our respective programs express these principles in different ways. Our collective experience raises important questions, which we hope will stimulate discussion among the reunion participants. For example:

Mathematicians and educators are increasingly beginning to ask questions like these.  What do Ross alumni have to add to this discussion?
To loosen tongues around the room, we may pull out some old samples of the Ross problem sets and consider specific ways in which these problem sets might be relevant (or irrelevant) to teacher education today.

As alumni of the Ross Program we have vivid recollections of the program's effect on the ways we approach life intellectually and in the spirit of exploration. We all remember the many bright young people we interacted with as young people. We know these interactions made a difference in our lives and how the experience of immersion in mathematics changed us in the way we approached learning and living.

Questions about prime numbers constitute some of the most celebrated problems in all of mathematics. At the popular level, one frequently hears asked: "Is there a pattern in the set of primes?" This is often allied with the question of whether or not the primes are "random." These queries are somewhat ill-formed, but in various guises they reappear even at the upper echelons of research in number theory.

In this talk we will look at some attempts to answer these questions, ranging from recreational to research-level. Towards the end of the talk we discuss how some of these questions look from the vantage point of generalization: suppose that, in the spirit of the Ross program, one replaces the ordinary ring of integers by the ring of polynomials modulo p. This is the subject of the author's doctoral dissertation, currently in progress at Dartmouth College.

Patterns That May Not Last

Observing patterns in numerical data can be a source of important (and unimportant) mathematical developments. However, while numerical experimentation has a useful role in suggesting new ideas or conjectures, it is no substitute for a proof. There really are patterns that last for 100, 1000, or even billions of terms but which eventually break down. We will look at patterns (largely drawn from number theory) which persist for a while. Students will have a chance to decide whether they think the trends continue forever or stop working. Then the truth will be revealed.