A collection of line segments contained in a unit square is said to be a barrier if every straight line that crosses the square cuts one of those line segments.  Note: A barrier is not required to be connected.

The barrier problem has many variations and generalizations, but the original problem is easily stated.  Suppose a convex set  C  in the plane is given.  A set T is called an opaque set or a barrier for  C  if every line that passes through C also meets  T.

Problem. For a convex body  C in the plane, what is the smallest total length of a barrier  T?  Typically there are additional constraints:  C  is a polygon;  T  is a union of line segments;  the barrier  T  lies in the interior of  C,  or in the exterior. 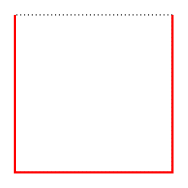 Figure 1. The given barrier has length 3.[/caption]

This barrier problem was first introduced by Mazurkiewicz in 1916, but a solution has not been found even when  C  is a unit square. Some initial steps are mentioned below…but please stop reading right now, and try to find a few solutions for yourself before continuing! 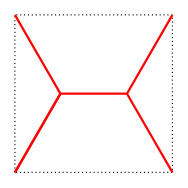 Let MBL(C) be the minimal barrier length for convex polygon C.  Let’s write  p(C)  for the perimeter of C.  A line that meets the interior of  C  must cross the boundary, and consequently:  MBL(C) ≤ p(C).  In fact, any such line passes through two sides of C  so the set  T  of all but one side of C is opaque.  Therefore MBL(C)  <  p(C). 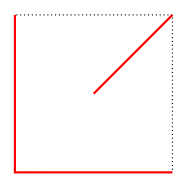 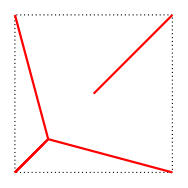 But a barrier need not be connected!  With some thought (and luck), a flash of insight yields a barrier built from two sides and a half-diagonal (see Figure 3).  This one has length  2 + √2/2 ~ 2.707,  shorter than the previous barrier.  With Steiner-type moves we can optimize this two-piece version to get the barrier in Figure 4, with length √2 + √6/2 ≈ 2.639.  This one is conjectured to be the shortest barrier for the square, but no one has ever found a proof (or a shorter barrier). 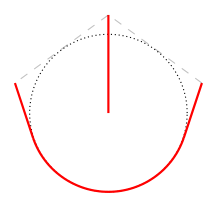 While exact solutions are not known for any of those barrier problems, some upper and lower bounds have been proved.  For example, if  B  is a barrier for convex body C,  then  length(B ) ≥ 12p(C). A proof is given in Reference [1].

Most questions surrounding the Barrier Problem seem to be open.  In Reference [2], the authors mention some interesting problems, many of which seem obviously true… but no proofs are known.  For example, two such PODASIPs are: