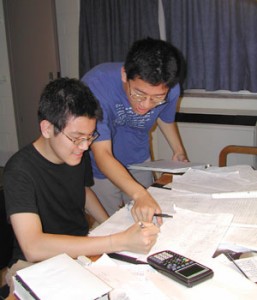 The first year course in the Ross Program is organized around a series of daily problem sets in number theory. These sets invite the participants to contemplate a variety of seemingly simple questions about numbers and their relationships. As the summer progresses the students are encouraged to investigate these questions in increasing depth, and to return to them periodically as their skill at abstract reasoning and their collection of available tools become more powerful.

This spiraling of concepts is summarized in the Ross Program’s motto:

To realize this idea, we concentrate on one central theme, rather than touching lightly on many disjoint mathematical topics. Ross students spend the entire summer focusing their attention on integers and their properties.

The term begins with investigations of topics involving prime numbers and modular arithmetic. Participants observe curious numerical properties and search for satisfactory explanations of them. Starting from a list of “axioms”, they learn how to write proofs that are rigorous and complete. Even the simplest of those proofs might become important later in the term, when similar ideas are investigated in other contexts.

After examining concrete numerical examples, students identify patterns and then formulate general algebraic statements that include those numerical examples as special cases. They work to prove that those statements are true, and then use those proofs to help explain new observations. Eventually they encounter versions of the original questions in other contexts and begin to appreciate them from a deeper perspective. Some of these investigations lead to significant insights into the structure of number systems and the underpinnings of algebraic formalism. By considering simply stated questions from several directions, participants attain some understanding of how professional mathematicians and scientists work: gathering data, looking for patterns and analogies, making conjectures, and finally testing and proving those conjectures.

Students should expect to get deeply involved in intensive, mathematical work. Although formal classes take up only eight hours per week, Ross participants work hard during the many hours of unstructured time. They think about the many mathematical problems, and struggle with the difficulties. After a lot of effort they finally develop methods of thought that will prove useful in many aspects of their scientific lives.

To provide an idea of the level of mathematics involved, here is a copy of one of the Ross Program problem sets. The range of topics discussed in the Ross Number Theory course also indicates the depth and scope of this fast-paced but rigorous course. 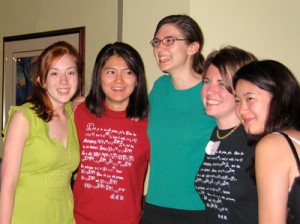 For such an intensely problem-based approach to succeed, students need careful and personal feedback on their work. This job is done by the Ross counselors, who live in the dormitories along with the younger participants.

Counselors are undergraduate math majors or graduate students who are studying mathematics and science at some of the best colleges and universities. Each counselor contributes a tremendous amount of time and energy working directly with several first year students. In addition to their jobs as student advisors, counselors add to the Program’s atmosphere of mathematical excitement by participating in advanced courses and by presenting their own “dorm courses”. The counselors’ enthusiasm is contagious, and they try to bring all participants together to form a true community. But ultimately much of this task falls to the students. It is the students themselves who devote their time and energy to meet the challenges set for them.

Many alumni of the Ross Program have kept in contact with us. Some of their enthusiasm for the Program is evident in their comments posted on the alumni news and comments page.

The Ross Mathematics Program admits students of any race, color, national origin, and ethnic origin to all the rights, privileges, programs, and activities generally accorded or made available to students at the Ross Program. It doesn’t discriminate on the basis of race, color, national origin, and ethnic origin in administration of its educational policies, admission policies, scholarship and loan programs, and athletic and other Ross-administered programs.