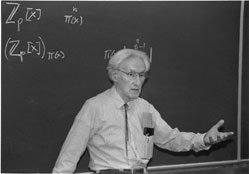 Professor Arnold E. Ross founded his math program for high school students in 1957, and he continued to run it every summer until 2000. Further information about his background and accomplishments is provided in a short biography and a much longer history.

From 2000 to 2018 the Ross Program was led by Daniel Shapiro. Now Jim Fowler has taken over as Director, but Shapiro is still active as Director-Emeritus.

Our Sixtieth Anniversary Celebration was held in June 2017.

A Reunion-Conference was held in Columbus on June 16 - 18, 2017.
Alumni and friends joined together to renew ties, reminisce, and meet current Ross participants.
Previous Ross Reunion-Conferences were held in 1996 , 2001 , and 2007.

If you were once a Ross Program participant, we would love to hear from you, at ross@rossprogram.org.

See our News and Comments pages for a few alumni messages.
You are also welcome to contribute a Ross anecdote, and to visit the Arnold Ross Facebook page.

Of course our Program needs financial support to pay for scholarships and other expenses.

Further information of some interest to alumni